I am honored to  be a guest on Coast to Coast AM with host Richard Syrett for the first two hours of the show. Tune in for discussions on Magnetic Energy 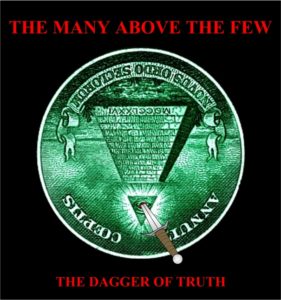 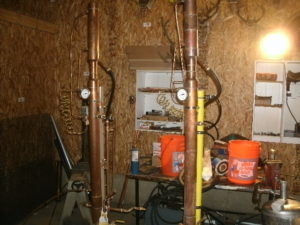 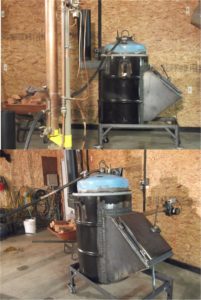 Let me say this first. Ethanol production is not for everyone but for small farmers, preppers, off-gridders and entrepreneurs. quality of life can be raised and cash can be made.

My brother Rex and I have been experimenting with small-scale ethanol production for about 5 years now to build some expertise in the subject. We have built a number of stills based on the classic Warren design and added improvements to the design. The stills we build are near bullet proof. We have also designed and built an energy efficient prototype boiler that will burn practically anything. scrap wood, cardboard, yard waste, regular firewood and my personal favorite, wood pellets.

The reason we went to all this trouble was to build a small scale ethanol production system that is labor minimal and trouble free. What we came up with is a system that doesn’t eat up time everyday, break your back with heavy lifting and labor or require much money to keep in  production.

The goal for anyone into ethanol production is to make it pay and pay well. That requires some brain work and handy skills to get it going.

The number one issue is feed stock. All is for not if you don’t have a source of low cost starchy material or sugar. The number two issue is something low cost to burn for fuel to cook stillage and run the alcohol off. Once you have these two issues covered then the rest of the story is to  put a system together that minimizes labor and time usage and creates a high quality fuel grade product.

The business model is to take money out of Exxon-Mobile’s hands and put it into your hands. Once you study the subject and apply the info to your life situation then you can customize an ethanol system that serves your purposes.

A five acre mini-farm that feeds corn to steers and milk cows can create the alcohol at near zero cost using the animal feed as the feed stock for your ethanol production. you  then feed the spent stillage to the cattle; the stillage being a much higher grade of animal feed.

If properly done the alcohol production radically reduces money spent on Exxon-Mobile, improves the farms profitability and the better animal feed means a better price for your steers and more  meat and milk.

If your just an average guy living in the country you can sell ethanol to your neighbors and friends right out of your front yard and that is after you get the government to cover your cost with a $.75-1.00 per gallon subsidy.

A family of preppers producing 25 gallons of fuel grade alcohol a  week could stockpile 1300 gallons of fuel in a year. That is trading stock, quick cash, fuel for the four wheeler and side x side and all the hot meals you can eat.

There will be more posts coming on this subject. By the way I have a number of 3″ Warren Column Stills in stock for the bargain price of  $2500 apiece. If anyone is interested drop me an email.

I came into the world in 1957 in a small reservation town in Eastern Washington State. My folks were not your average bears by any means and there is no describing their influence upon my life. They both survived hard times, poverty, the depression and war. They both put aside opportunities and their own needs and wants from an early age in the name of family and the needs of others; people of stature and intellect and ethics and not a hypocritical bone in their bodies. Not to mention they were both comedic and really fun to hang out with. Dad passed away at 90 a few years back and mom is 89 and dialed in.

Mom and Dad raised seven boys and two girls. The thing about my parents was that they felt a serious obligation to society that their children didn’t turn into adults with low moral character that were a burden on society. This ethic and 9 unruly and not so tame children made for quite a dynamic.

Omak in 1957 was the last of the wild west with real Cowboys and Indians. It was a rough and tumble place and growing up there was where I learned about the best and worst aspects of human nature.

My Mom and her family were tribal members and using the term of those days “breeds”. When people today talk about racism and how bad they have been stepped on I think back on my mom’s family history. So many people will not give credit for how much racism has faded in this country. My brothers and I lived rude racism up close and personal in a reservation town. It deeply affected us and didn’t endear us to local society. When I graduated from high school I moved to Phoenix, AZ to attend tech school; suddenly I was just another guy living in a place where the people I had to deal  with on a daily basis weren’t generating hatred and contempt towards me. It was a revelation to me to see clearly what growing up in that world did to my psyche. It took me a long time to decompress and to forgive.

That being said, I am not whining or indulging in victim-hood. The other half of the story is that I ran with a pack of friends who all really valued the concept of “all the fun you can have”, awesome guys and close friends to this day. I had a whole lot of wild and free fun, and then some more fun stirred up with death defying adventures of all  kinds. The folks gave me a lot more freedom then most kids get so long as I didn’t burn the house down or bring the cops to the door. Firearms, big power tools, electricity, science experiments of every kind, dogs, cats, terrariums, aquariums, snakes, lizards, fish, bugs  radios,electronics, model airplanes, minibikes, travel adventures on my own, mountaineering, camping, hunting, fishing, river running, sandlot sports, cars and more, and that long list doesn’t include the unapproved activities that to this day my brothers and I still have secrets. There was always a lot of action going on at the Babcocks and it didn’t set well with the small minded neighbors.

That is the world I launched from and little did I realize at the time that I was well prepared to deal with the coming incredible journey that I know as my life.

I am new to this blogging thing and being a private person I normally wouldn’t post something on a website about my life. But in this case the story about the journey that brought Magnetic Energy technology and science about, needs to be told along with the rest of the story.

My life has been a quest for knowledge that can only be found by blazing the trail and using human capacities that we all have but few use. I earned what I know and no amount of money could have bought the knowledge that I have earned.

I am going to end the story for now but more to come.